How do people enjoy their time after they hit retirement age?

Some say they will spend more time with family and friends.  Some say they will travel and see the world.  Some say they will do what they enjoy doing.  Some … just do it!  Here’s the young-at-heart group; a perfect example of those who refuse to surrender their muscles to old age.  They had said “I looked forward to retirement – to explore, expand and enjoy life”.  And they keep their promises.

The Black Hawk Hiking Club members from the Quad Cities Iowa were in town for a week, and the group hikers were staying at the Duluth Indian Point Campground from July 6-13 -- the days are flying by so quickly, we are moving fast, it seems, toward Fall.

Most of the folks who belong to the Black Hawk Hiking Club are enjoying the Fall of their lives, yet they are as vibrant as Spring chickens.  The club, which was founded by a wealthy lawyer in the early 1900s, is proudly cruising through its 92nd years in existence and never (knock on wood) cancelled any scheduled event yet; rain or shine, they keep their commitment.  Hikes are scheduled from September to early June with only one Big Hike held during the summer month. Jo Ellen Langerman, a team member of this year’s Big Hike organizers did call us after the historic flooding hit Duluth in June just to make sure she did not need to break the record.  We were glad the nice 80F weather welcomed and pampered them the whole week.

Sandra Sohr called the day before arriving to make sure she got the right address and direction to the campground.  She showed up early on Friday, as promised, around 11:00 a.m.   Sandy has been a widow for more than 10 years.  After her husband passed on she let go of her canoe, bought a kayak, “because a kayak is more stable”, she said.  She has always been fond of the outdoors; she and her husband had enjoyed many experiences together.  He died of lung cancer many moons ago but she is not ready to say goodbye to nature yet, so she joined the club three years ago and continues her adventure in nature.

She has always wanted to come to Duluth and explore this area’s natural beauty, she confessed.  Eleven years ago she went to the UP – referring to the upper Michigan peninsula -- alone.  “I’m now 11 years older so it would be wise not to go hiking alone anymore,” she added with a chuckle.  Sandra has two children; her son is a K-9 officer in Lombart, IL.  Her daughter is a director with the city of Davenport, IA.  Both of them are into outdoor activities and nature just like their parents.  We should know the apples do not fall far from the tree.

Helen Christopher has been a member of the club for 25 years.  Helen was introduced to the club by her sister and she went to the first small hike on a New Year’s Eve in 1983.  She loved it so much that she finally joined the club and went with her husband on a 17-day hike to the Canadian Rockies.  Sadly, her husband passed on from heart attack shortly afterward.  Her second husband does join her on small hikes – usually around Quad City area – but he is not fond of going on the big hikes.  He had slept in a camp when he was in the Korean War; “that experience was enough for a life time,” Helen quoted her husband.  Helen is not ready to throw in her hiking sneakers yet so she continues her heart’s desire to rendezvous with nature, and this time she is joined by her 12-year-old grandson Hunter.

Helen says she has been blessed with so much, “I’m able to go places and see things I wouldn’t have been able to experience otherwise”.  She blurted out two places that top her list – the Canadian Rockies and the Grand Canyon – as she kept on task getting dinner ready for the group.  The group assigns teams to be responsible for each meal time; one who serves meal and one who cleans afterward.  Cleaning team gets to eat first so they can start cleaning dishes accordingly.  They brought in prepared meals for dinner, cook breakfast and have lunch closer to where they hike during the day.  The last night in town they all go out to dinner.

Helen moved around as fast as she talked, once in a while she sat down to join my conversation with LaeUna and elaborated on what she talked about, then went back to her task.  LaeUna DeWitt has been a member as long as anyone and is one of the oldest members in the club, and she is not shy to share her age -- she will be 72 in September and she does not show it.  She is full of energy and has never been married, “that may be the secret?” I added.  “I harass people,” she said with a smile while looking at Helen; not taking things too seriously is what she meant.  She then added, “I just don’t like to think about pain, there’s so much to enjoy in nature and I don’t want to miss it.”  That, I think, is the real secret to this group.

LaeUna moved to Davenport, IA in the late 60s and taught English in a junior high school.  A teacher friend introduced her to the club; she went hiking the first time in 1969 and finally joined the club two years afterward.  There are more than 250 members of the club; the majority is in their sixties.  Some are in their fifties, or younger, and they are usually brought into the club because their families are members.  A few of them are above 100 years old – the oldest member now is Malvina Swanson who is 104 years young -- they cannot join the hike anymore but they still receive the bulletin and stay in tune with the club’s activity and news.  The club recently said bon voyage to its eldest member who passed on at 107 years old, she still had a valid driver’s license up until three years prior to her passing, and put it to use as well.  Being active is certainly the key to being productive.

LaeUna and Helen took me back to some memorable moments they shared together on big hikes.  LaeUna does not swim.  During the hike to Grand Canyon, the first big one she went to, they climbed up a cliff on the Colorado River, which was about 30 feet high.  The group dared her to jump off the cliff knowing she did not swim.  She did it, she was the first woman in the group to do so, and then Richard, another one of Helen’s grandson who was 11 years old then, followed suit.  The rest of the group then jumped one by one; they played the tune we heard often “if she can do it, we can do it”.  The ride to reach the top of the Canyon was a story in itself.  The group took horses to climb up a steep-side canyon carved by the Colorado River.  The storm came up as they were trying to reach the top, LaeUna was riding Red and she kept talking to her for the 5-6 miles ride, giving her support to not give up.  When they reached their destination, LaeUna told the ranger who was in charge of Red how brave she was and how they were a good team.  The ranger told her that Red surely was a great horse even though she was deaf.  Another thing LaeUna is proud of since she joined the club is that she was a matchmaker made in nature.  Nadine is a lawyer from Geneseo, IL, she and Jerry were introduced to each other during a canoe trip in 2002 by none other than LaeUna.  Eight months later he proposed to her and they got married three years afterward.  Nadine and Jerry were a part of the 23-person hiking team that stayed at our campground last month. 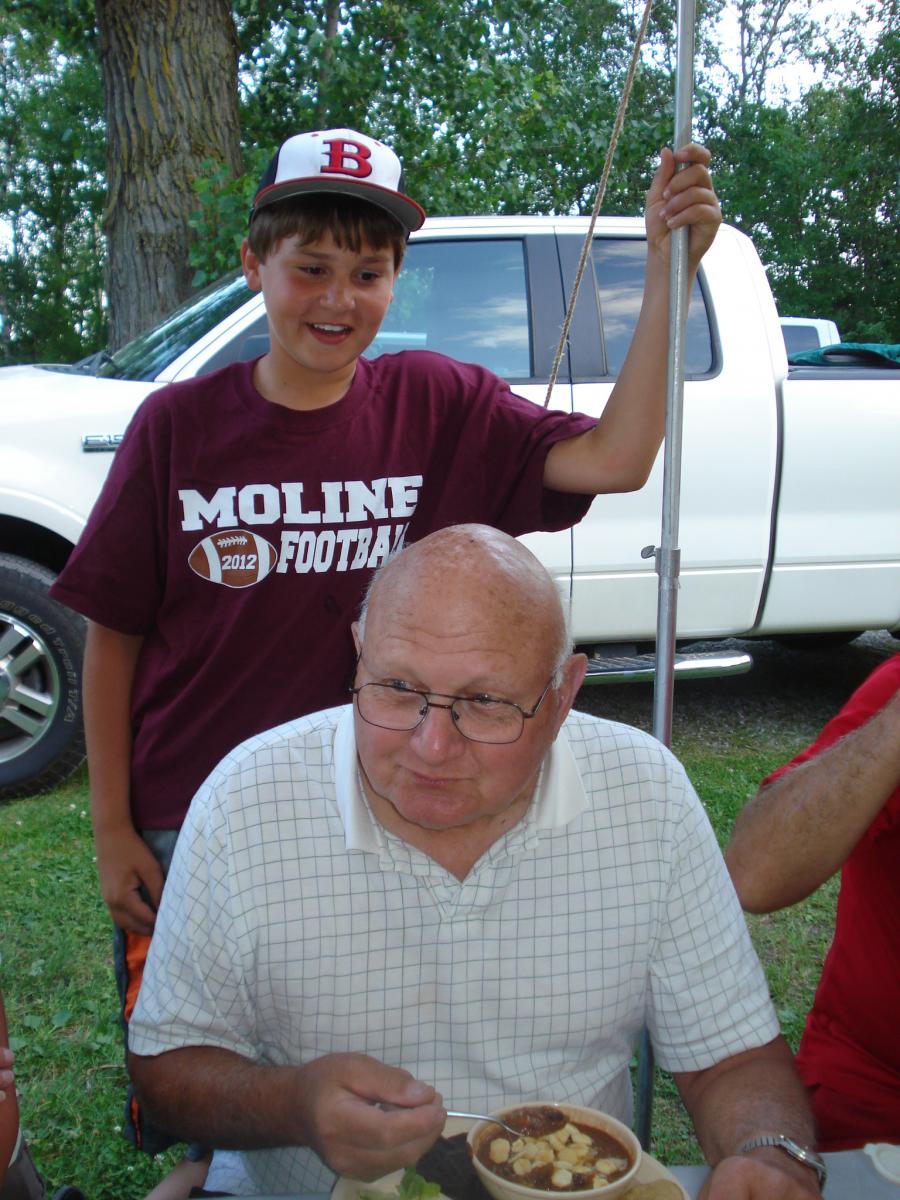 You may wonder why there are more female hikers mentioned in this article … they are more women who are members and obviously more women as well who go hiking.  This year’s Big Hike organizer, though, is led by Bill Burns who has been with the club for 10 years.  He moved to Davenport from Ames to be close to his sons.  His sister and brother are quite athletic, Bill confessed, “this is as athletic as I can go,” he added.  Not bad at all for someone who turned 78 this month.  Six years ago Bill was diagnosed with cancer that hit between his large and small intestines, and it almost parked on his liver.  He had a surgery and then a six-month chemo.  It did not ground him; it is a proof that diseases do not get a long with active people.  Diseases may come and knock on their doors but healthy bodies and joyful minds will not make friends with them.  Bill is a retired army man; he was stationed in Germany for three years and married a German lady, a nurse; they will have been married for 53 years this coming September.  Other than a positive outlook to life, he has been looking at the world, and the universe for that matter, through another set of eyes – a camera.  His experience ranges from being a photographer to a German newspaper, working for a motion picture, and a space communication module.  He was in the military for 21 years, with the Iowa Highway of Transportation for 35 years and the National Guard for some more years afterward.  One thing we cannot get Bill away from is nature.  His sister is the one who lured him into the hiking club.  They grew up in the southern part of Iowa; nature was their playground; free and open all day, 24-7.  He certainly is a nature boy.

And these are nature people.  All of them have the same answer when asked what drew them into the club.  Nature is their home.  And we can learn a lot from what is in nature, getting lost in it is a way of finding ourselves -- a place to introspect and meditate.  When the saying goes “idle mind is the devil’s workshop” we can then say “idle body is the disease’s playground”.  When we take control of our own wellness – body, mind and soul – we do not need to worry about other’s healthcare plan because our well-being begins with us, we design the plan.  And these young-at-heart hikers from Iowa surely walk the talk.  They are the real evidence of productive life after sixty.  Keep moving queens of the trail and kings of the land.  Until we see you again, happy hiking!